A-Track for Windows (A-Track) is a powerful FREE extension to complement the facilities of your NCE Corporation Power Cab or Power Pro Digital Command Control system and to assist you in organising and running your roster of locomotives on your model railroad.

A-Track is a software application which runs, under Windows XP, Windows Vista, Windows 7, Windows 8 (including 8.1), or Windows 10 on a standard Personal Computer (PC). When using an NCE Power Cab system (including systems based around an NCE SB3a or SB5 Smart Booster unit, or the entry-level DCC Twin),
A-Track is connected to your system via an NCE USB Interface unit, as shown in the example set-up below for a Power Cab system - 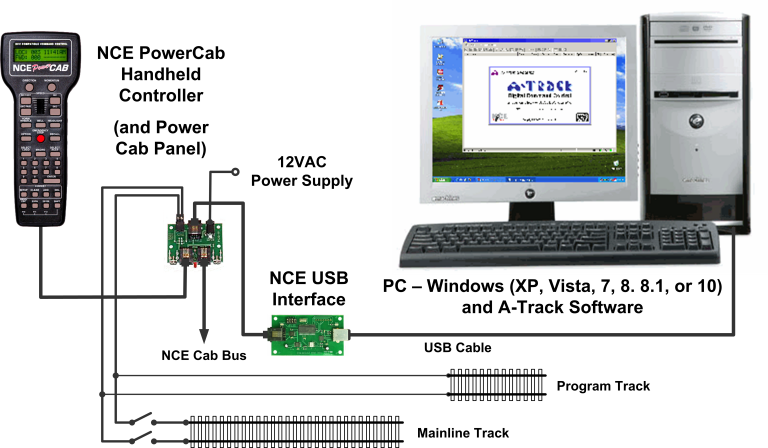 Alternatively, if you have an NCE Power Pro Command Station, you can simply connect A-Track to it via a standard Serial Port, if you have an older PC which is fitted with one, or via a USB Port and any readily-available USB-to-Serial (RS232) converter unit, as shown below - 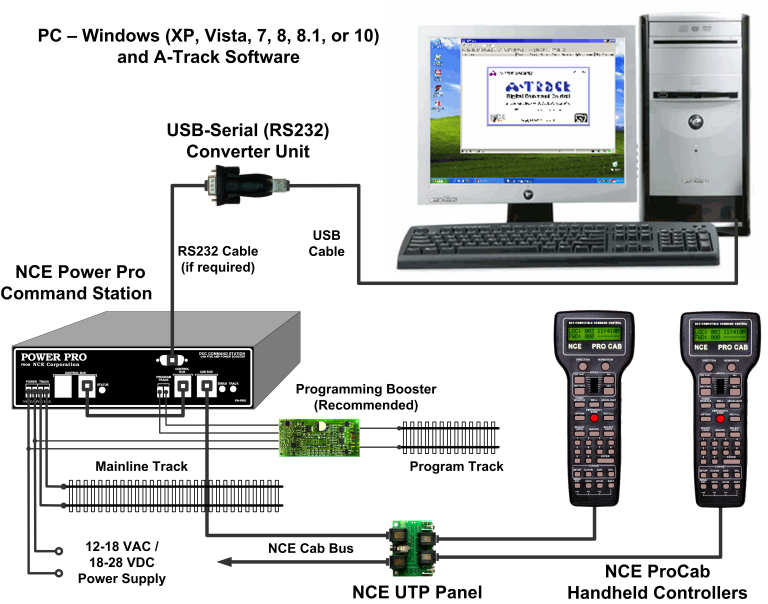 When used with either an NCE Power Pro, a Power Cab or Smart Booster Version 1.65 system, or a DCC Twin (and a Version 7 USB Interface where appropriate), A Track will also let you monitor, set up, save, and restore the complete status and operational parameters of the NCE Command Station and all attached Cabs from your PC

Note, however, that these set-up facilities are not available when A-Track is used with the earlier Version 1.28 of the NCE Power Cab and Smart Booster systems, or with a Version 6 USB Interface.

Control and Monitor Your Layout

As well as handling locomotive decoders, A-Track also lets you program and operate accessory (or stationary) decoders, primarily to control turnouts on your layout. To make operation as simple as possible, A-Track allows you to construct an on-screen graphical view of all your layout turnouts, such as that shown in the two example panels below –

With NCE Power Pro and Version 1.65 Power Cab systems, A-Track gives you full access to the Command Station, and the ability to display all of the key parameters stored in its internal memory on the PC screen –

Given the current size of hard disks and the amount of RAM fitted in a modern personal computer, there is no practical limit to the number of different Command Station, Cab or decoder setups which can be saved to, or restored from, the computer’s permanent or removable storage. A Track can handle equipment roster lists stretching to hundreds (or even thousands) of equipment items. However, such large lists tend to be unwieldy to view and manipulate, so it is usually easier to compose and save shorter rosters – corresponding, for example, to an operating session.

A-Track can handle simultaneous connections to several Command Stations where, for example you use a Power Pro to run your main layout and have a Power Cab connected to the programming track. In such a case, you can have two instances of A-Track running on your computer at the same time, allowing you to switch from operations to programming, and back again, at the click of a mouse.

As well as its primary purpose of storing and manipulating the contents of DCC decoders and your Command Station, A-Track also allows you to control any selected locomotive or set of turnouts on the main track directly from the PC, using the mouse and a ‘soft’ on-screen controller to issue DCC commands directly to the NCE Command Station. Although this control function is really intended as a test facility, to check the results of programming a locomotive decoder, for example, you can call up and operate as many as eight ‘soft’ controllers on the screen simultaneously - if you think you possess the capability and dexterity to run eight locomotives simultaneously on the layout by yourself !

Obtaining Your Copy of A-Track

A-Track may be downloaded completely free of charge for your personal or club use - see Get A-TRACK for details.

Once installed, you have the option of registering your copy of A-Track, also without any charge, in order to have priority with regard to support and assistance in rectifying any problems which you may come across.

Please note that the term "completely free of charge" must not be confused with "free for you to exploit as you wish". A-Track is copyrighted software, and not a public domain product. You may not distribute or sell A-Track either alone or as part of any commercial item, as set out in detail in the terms of the A-Track licence.

If, after using A-Track, you think that it is of benefit to your model railroading activities, and would like to support future A-Track development and enhancements, then you are welcome to make a voluntary donation - but you will not be "nagged" or pressured to do so.

Donations can be made safely and securely via PayPal, using any credit or debit card, even if you do not have a PayPal account. Click on the button below to proceed -